Summary:
⦁ The best time of the season begins in January and extends through early April.
⦁ Once regarded as among the most beautiful ranch mansions in all of South America.
⦁ La Villa can accommodate a maximum of six anglers each week of the short Tierra del Fuego summer.
⦁ Anglers at La Villa will rotate through the premier pools of the Rio Grande.
⦁ Tierra del Fuego is more than 1,800 miles south of Buenos Aires.
⦁ Sea-run browns on the Rio Grande average just under 9 pounds.
⦁ About one in 50 is a monster, pushing or exceeding 30 pounds! This is arguably the finest fishing of its kind on the planet.

Fishing Program:
Guests will leave the lodge around 9 AM after breakfast each day, fly fishing until around 1 PM. Following lunch at the streamside mini-lodge, anglers will enjoy a traditional siesta (the hours of which will depend on the season) with guests returning to the river between 4 and 6 PM to fly fish until dark. Please be sure to bring your headlamp!
Salmo Trutta remain in the river for a period of time which ranges between 1 and 4 years until their first migration to the sea, where they will feed and grow for about 6 months before their first return to freshwater, weighing approximately 6 lbs. Researchers have found trout which had spawned more than 6 times. A trout which as completed 4 cycles of returning to freshwater can weigh over 20 lbs. The frequency with which they return to freshwater is also an indicator that the fish face very few threats. Whilst also providing a very real example of the benefits of Catch and Release. Guided are equipped with nets and will assist guests in weighing and releasing fish without damaging them
The first brown trout were stocked in Tierra del Fuego by John Goodall in 1935. Shipped from Puerto Montt in Chile, 60,000 “Salmo Trutta” eggs survived the arduous journey, to be planted on the Candelaria and McLennan Rivers, both tributaries of the Rio Grande. These fish eventually found their way to the sea, possibly attracted by the rich nourishment of the estuary. These sea-run brown trout now complete the yearly migratory cycle of salmonids, spawning during the summer months in freshwater. 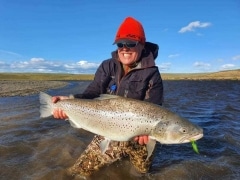 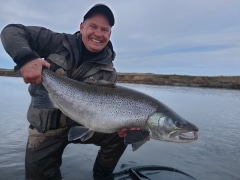 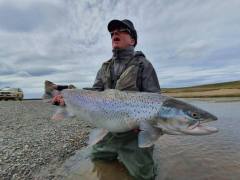 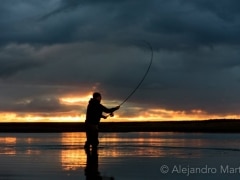 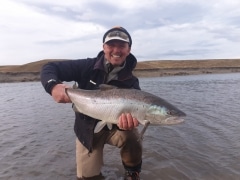 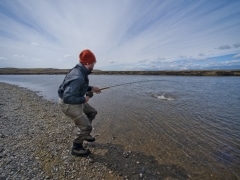 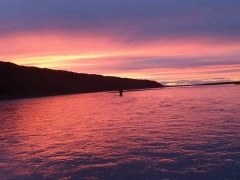 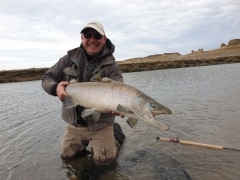 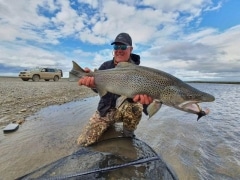 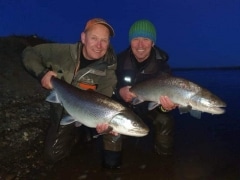 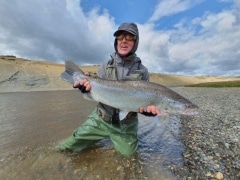 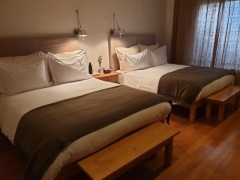 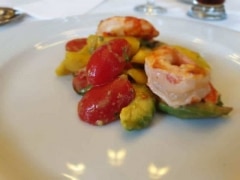